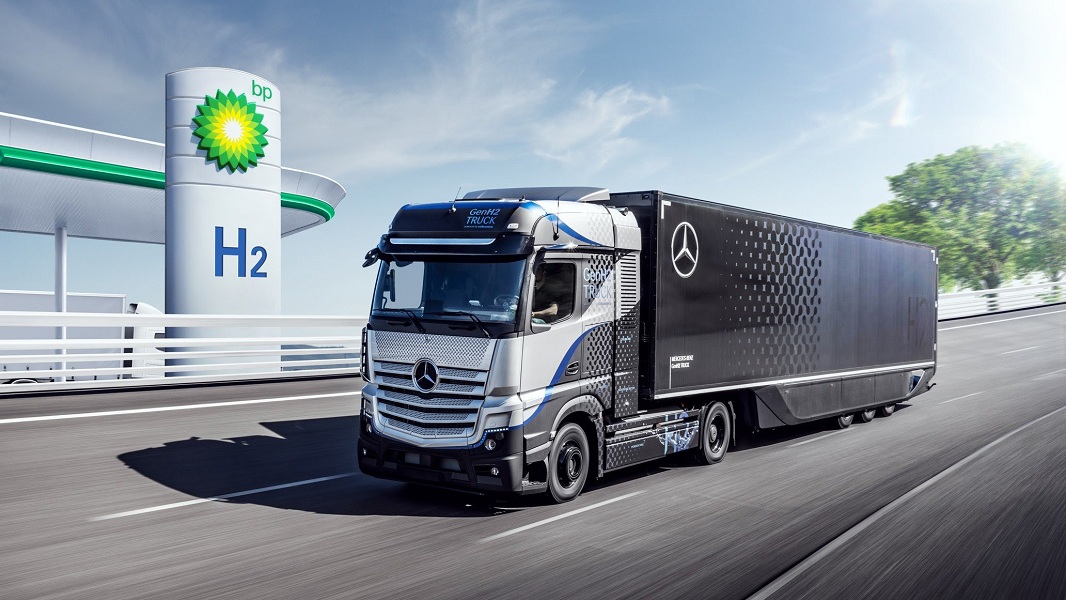 bp and Daimler Truck AG today announced plans to work together to help accelerate the introduction of a hydrogen network, supporting the roll-out of a key technology for the decarbonization of UK freight transport. They intend to pilot both the development of hydrogen infrastructure and the introduction of hydrogen-powered fuel-cell trucks in the UK.

Under their memorandum of understanding (MoU), bp will assess the feasibility of designing, constructing, operating and supplying a network of up to 25 hydrogen refuelling stations across the UK by 2030. These stations would be supplied by bp with ‘green’ hydrogen – generated from water using renewable power. Complementing this, Daimler Truck expects to deliver hydrogen-powered fuel-cell trucks to its UK customers from 2025.

Emma Delaney, bp’s executive vice president for customer and products, said: “Hydrogen is critical to decarbonizing hard-to-abate sectors – and for heavy and long-distance freight it is sometimes the only answer. Working with a leading manufacturer like Daimler Truck AG we can accelerate the deployment of both vehicles and infrastructure and pioneer the use of hydrogen to fuel the next generation of [UK] freight. From producing and supplying hydrogen through to building and operating the fuelling stations, bp is perfectly positioned to transform transport and ultimately build a better energy future.”

Karin Rådström, CEO of Mercedes-Benz Trucks and Member of the Board of Management at Daimler Truck said: “We are consistently pursuing our vision of CO2-neutral transport. Especially for CO2-neutral long-haul road transportation, the hydrogen-powered fuel-cell drive will become indispensable in the future. Together with bp we want to jointly develop and scale the required hydrogen infrastructure by putting our hydrogen-powered fuel-cell trucks into our customers’ hand and thus supporting the decarbonization of the UK freight network. At the same time, political support plays an important role in promoting the creation of an infrastructure for green hydrogen and making an economically viable use of fuel-cell trucks possible for our customers”.

Daimler Truck has the ambition to offer only new vehicles that are CO2-neutral in driving operation (“from tank to wheel”) in Europe, North America and Japan by 2039. The company is focussed on both CO2-neutral technologies, battery power and hydrogen-based fuel-cells. Currently, the truck manufacturer is testing a new enhanced prototype of its Mercedes-Benz GenH2 Truck on public roads in Germany. The first series-produced GenH2 Truck are expected to be handed over to customers starting in 2027.

Daimler Truck has a clear preference for liquid hydrogen. In this state, the energy carrier has a far higher energy density in relation to volume than gaseous hydrogen. As a result, the tanks of a fuel-cell truck using liquid hydrogen are much smaller and, due to the lower pressure, significantly lighter. This gives the trucks more cargo space and a higher payload. At the same time, more hydrogen can be carried, which significantly increases the trucks’ range. This will make the series version of the GenH2 Truck, like conventional diesel trucks, suitable for multi-day, difficult-to-plan long-haul transport and where the daily energy output is high.

Convenience and mobility are core for bp’s strategy, including working with partners, to help deliver the future of mobility and services for customers. In electrification, bp already has 11,000 electric vehicle charging points globally and is aiming to expand its network to 70,000 by 2030. Complementing this, today’s agreement represents bp’s first steps towards deploying hydrogen for transport. bp also intends to develop hydrogen refuelling stations in Europe and already has plans for hydrogen refuelling stations in Germany.

bp aims to develop a leading market position producing and supplying low carbon hydrogen. In the UK, bp has plans to build a hydrogen-producing facility in Teesside, UK, which could produce 1GW of blue hydrogen, produced from natural gas integrated with carbon capture and storage. bp is also exploring the potential for green hydrogen in the region, including supporting the development of Teesside as the UK’s first hydrogen transport hub. These activities support the UK government’s target of developing 5GW of hydrogen production by 2030.