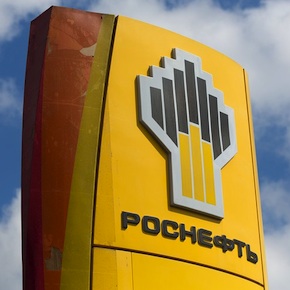 • Company buys 30% of Shorouk concession, has option for 5% more.
• Russian energy producer values deal at as much as $2.8 billion.
Rosneft PJSC agreed to buy as much as 35 percent of a natural-gas project off Egypt, joining Eni SpA and BP Plc in the largest discovery in the Mediterranean Sea.

The Russian company will pay Eni $1.13 billion for an initial 30 percent stake in the Shorouk concession, which includes the Zohr find, the Italian producer said Monday. Rosneft will add about $450 million to cover past costs and has an option to acquire a further 5 percent, which would also require cost payments, Eni said.

Rosneft’s acquisitions at home and abroad amount to more than $15 billion this year, according to data compiled by Bloomberg. The Moscow-based company, which pumps more than 40 percent of Russia’s crude and over 10 percent of its gas, has planned to expand its gas business for years. It has sought assets and contracts overseas, while at home challenging the piped-gas export monopoly of state-run Gazprom PJSC.

Rosneft valued the Shorouk deal at as much as $2.8 billion in a filing on Monday, without explaining how that figure was calculated. Its shares climbed 4.7 percent to 388.15 rubles in Moscow, bringing this year’s gain to 53 percent. Eni rose 3.9 percent at 5:01 p.m. in Milan.

Rosneft itself is currently the subject of an acquisition, with Glencore Plc and the Qatar Investment Authority agreeing to buy a 19.5 percent stake from the Russian government for $11 billion. The Egyptian project could make sense for a Rosneft venture with Glencore and the QIA because they both have expertise in natural gas, according to Ildar Davletshin, an analyst at Renaissance Capital.

Rosneft, which had more than $20 billion of cash at the end of September, sold 600 billion rubles ($9.8 billion) of 10-year bonds last week to refinance loans and fund development abroad. It’s set to pay back $3.8 billion of debt in the fourth quarter and $12.9 billion next year, according to its website.

The company may feel it has some “spare money” as the stake acquisition by Glencore and Qatar means Russia’s biggest oil producer won’t have to finance a buyback of its own shares, another option that was under consideration, according to Alexey Bulgakov, a fixed-income analyst at Sberbank CIB.

Egypt has said it will keep all of Zohr’s reserves for domestic use, allowing the country to cut LNG imports. Eni discovered the field last year, estimating its resources at about 30 trillion cubic feet. It expects the first gas to flow in late 2017.

BP, Rosneft’s largest shareholder after the Russian government, agreed to buy a 10 percent interest in the Zohr field from Eni in November for $375 million. It will also refund some past costs once the deal closes and has an option to purchase a further 5 percent before the end of next year.

Rosneft will get a 15 percent share of a joint venture with IEOC Production BV and Egyptian Natural Gas Holding Co., which operate the Shorouk project, according to its filing. It has an option to buy a further 2.5 percent in the venture.

The Shorouk deal has been “committed to paper” and financing will take into consideration the company’s “financial responsibility,” Tass reported, citing Sechin.

The price “is reasonable for big fields in an attractive location,” RenCap’s Davletshin said.