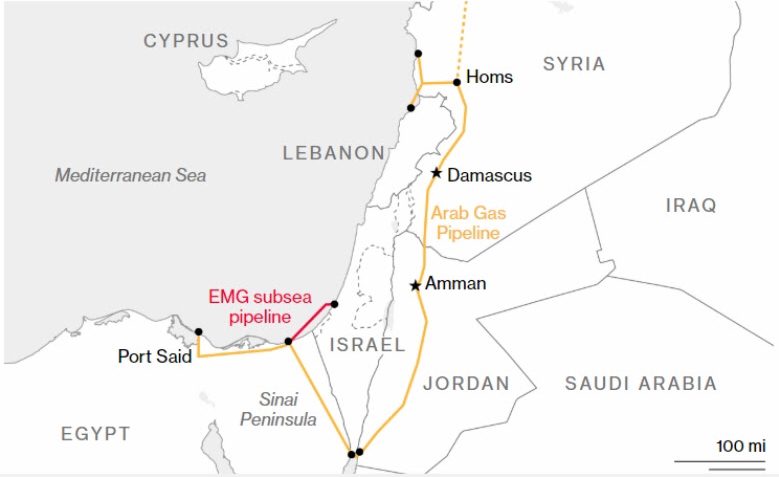 The companies developing Israel’s largest natural gas fields and their Egyptian partner have finalized details of a deal that would give them control over a pipeline to Egypt, according to people familiar with the matter, a crucial step that would pave the way for a $15 billion export contract.

The deal involves setting up joint venture companies in Cyprus and the Netherlands, through which Israel’s Delek Drilling LP, U.S.-based Noble Energy Inc. and their Egyptian partner, East Gas, would buy a 37 percent stake in Eastern Mediterranean Gas Co., held by businessmen Sam Zell and Yosef Maiman, among others.

An initial agreement is expected to be signed in a month or less, the people said, speaking on condition of anonymity because the negotiations are confidential. Separately, efforts also involve a substantial reduction of a $1.76 billion fine imposed on Egypt by an arbitration court in favor of Israel Electric Corp.

The agreements would eliminate legal obstacles to implementing the gas export contract, seen as a step adding economic depth to a relationship dominated by security since the two countries signed a peace treaty more than four decades ago. It would also advance Egypt’s plan to capitalize on its own giant Zohr gas field and become a regional energy hub.

Shares of Ratio Oil Exploration 1992 LP, a partner in an Israeli gas field that is party to the export deal with Egypt, rose as much as 3 percent on the news. The Tel Aviv Oil & Gas Index gained as much as 0.9 percent to 902.58, the highest in one month.

The deal is shaping up as follows:

Under the contract signed in February, Delek and Noble are to export 64 billion cubic meters of natural gas over 10 years to Egypt through Dolphinus Holdings Ltd. The buyout by the two companies and their Egyptian partner in effect settles three of the four arbitration cases that had blocked the contract’s implementation.

EMG Managing Director Maamoun ElSakka and an official at EGI, which is managed by Zell, both declined to comment. Representatives for Maiman, Delek, Noble and East Gas did not immediately respond to requests for comment.

The fourth arbitration case involved the fine awarded to Israel Electric Corp. after Egypt broke an earlier contract to supply gas. A Geneva arbitration court ruled IEC should be given $1.76 billion in compensation. The Egyptian government and the utility, however, have reached an initial agreement to reduce the fine to around $470 million, according to two of the people directly involved in the talks.

The reduced fine would be amortized over a period of around 15 years, and the main sticking point is over which bank would issue a letter of credit, the people said. IEC wants a top-tier international lender, while Egypt is pushing for the National Bank of Egypt, they said.

Exports Next Year
Under terms of the deal involving Delek, Noble and East Gas, the three companies will finalize technical due diligence on the pipeline after the initial buyout agreement is signed. They would then transfer the money to the EMG shareholders involved in the deal, the people said, adding that the agreement would go through regardless of the condition of the pipeline.

The companies are planning to start gas imports from Israel in the beginning of next year.