Issue of new Beach shares to Drillsearch shareholders will occur today, and trading of these shares will commence on Wednesday, 2 March 2016, on a normal settlement basis.

Acting Chief Executive Officer, Neil Gibbins, said “This has been a well supported transaction given the complementary nature of Beach and Drillsearch’s asset portfolios, and completion marks a significant milestone in the history of both companies. From Beach’s perspective, the merger provides an additional 19,000 km2 of gross acreage within our core Cooper Basin area. It delivers full ownership of our key Western Flank oil and gas permits, expands our gas and gas liquids acreage, and provides an enlarged exploration footprint.

Our focus now turns to integration, which will initially target cost reductions and portfolio optimisation. We aim to have integration completed by 30 June 2016, allowing a large portion of the expected $20 million in synergies to be realised during FY17.” An indicative timeline for key integration work streams is presented below. 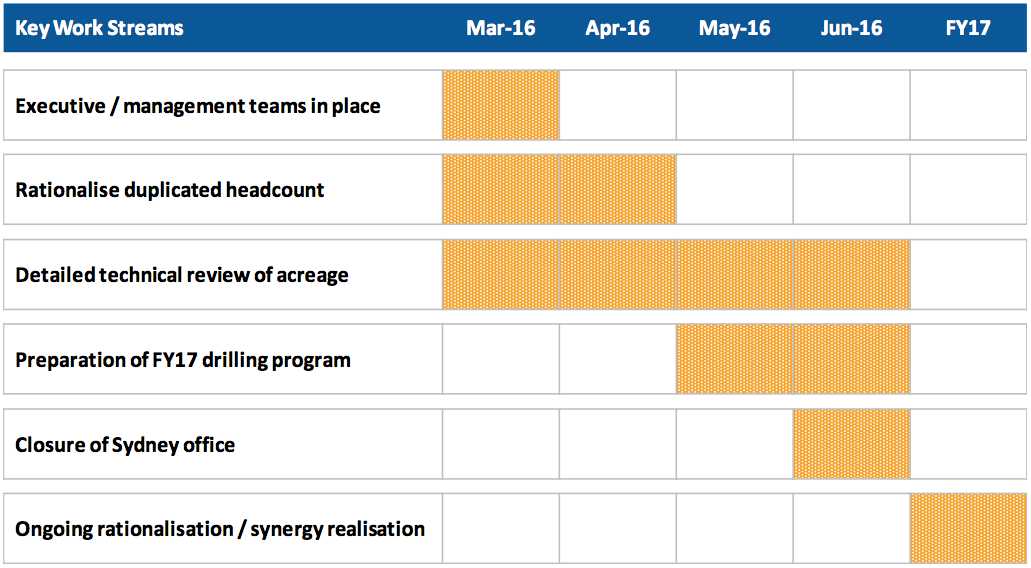 In relation to the merger, and as announced on 3 February 2016, Ms Belinda Robinson and Mr Robert Cole have resigned from the Board, and Mr Jim McKerlie and Mr Phillip Bainbridge have joined the Board as Non‐executive Directors. These changes take effect today.