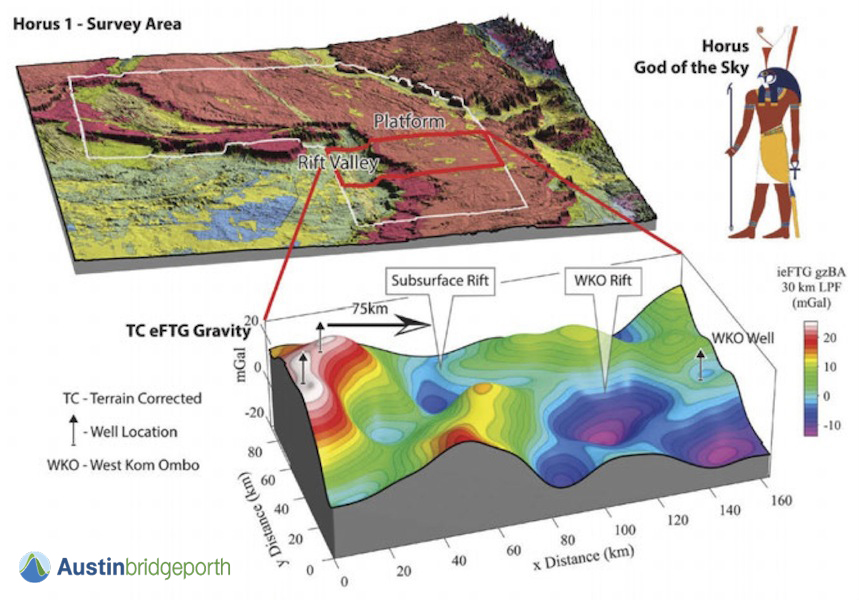 The first outing of the world’s most sophisticated airborne gravity gradiometer has already yielded fascinating insights into the unexplored Egyptian subsurface.

In today’s rich smörgåsbord of exploration technology, we rarely get to witness a significant leap forward in instrumentation advancement. Nonetheless, this is exactly what Lockheed Martin achieved in developing their newest state-of-the-art gravity imaging system, aptly called the ‘Enhanced’ Full Tensor Gravity Gradiometer (or eFTG for short). Some explorationists will be forgiven for thinking that gravity imaging has been around ‘almost’ as long as some of the ancient antiquities discovered by Howard Carter et al. So, what could possibly have changed so radically to revolutionise our world of exploration, and more importantly, when do we get to see evidence that warrants such superlatives. The answer is: a lot has changed and the data is available now!

Lockheed Martin are the only manufacturer to have successfully built and commercialised full and partial tensor gravity gradiometers. Based on 1970s cold war technology, they were originally designed to operate in the ocean and after declassification were modified to acquire data in the more dynamic airborne environment. With the exception of some minor upgrades and construction of a partial tensor system (rather than a truly full tensor system), little has changed over a quarter of a century.

However, in August 2020, after five years of development and testing, the eFTG instrument was exclusively released to AustinBridgeporth and mobilised to acquire data over an underexplored region of the Egyptian Western Desert (Figure 1). This new instrument, with a reported fourfold improvement in signal to noise ratio on its closest competitor (i.e. the Lockheed Martin built FTG; note no ‘e’), was tasked with acquiring gravity gradiometry data for a TGS-led multi- client programme, specifically designed to unlock the treasures that exist beneath 120,000 km2 of the Western Desert. On the face of it, a routine survey until you factor in firstly, that acquisition would take place in summer where the temperatures exceed 45°C, generating fierce turbulence; secondly, the survey area is three quarters the size of Florida; and thirdly, acquisition was to take no more than ten weeks. Quite the challenge for the first sortie into hydrocarbon exploration for the instrument; a challenge the eFTG overcame, surpassing all expectations.

The Ganope Petroleum Company manages and supervises all upstream and downstream oil and gas activities in Egypt between latitudes 28° and 22°N. The Western Desert is a vast kaleidoscope of rolling terrain and sand dunes punctuated by rugged ridges and a large north–south trending valley. Exploration in this remote landscape dates back over 50 years, but little has been undertaken of late, primarily because three wells were drilled into shallow basement, condemning the area to the ‘not prospective’ bin. This analysis was reinforced by several incorrect publications showing a shallow basement to extend over much of Ganope’s Western Desert area. A particular blow was the West Kom Ombo (WKO) well, sited to detect the western extent of the Kom Ombo Basin, a proven hydrocarbon basin with production to the east. The eFTG multi-client survey was to be the first high resolution dataset to be flown over this frontier area.

Fast-tracked processing results are already available and the survey is expected to complete by the end of September. Although AustinBridgeporth and TGS have only just started preliminary processing and interpretation, the results are already exceeding expectations. The team have identified pan-African and Arabian shield trends, and the uplift from the legacy gravity data to the eFTG data is quite remarkable even when looking at imagery on an 8-km line spacing. The images will only get better as we move from 8-km to 2-km line spacing and the processing is refined.

But what about the all-important prospectivity of the upper Western Desert? The three wells would never have been sited had eFTG data been available at that time, as they are located on positive high anomalies indicative of shallow basement. Even WKO, thought to sit in the basin proper, was drilled into a shallow structure. However, what is far more exciting is the discovery of a previously unknown rifted section beneath a carbonate/marl platform. The rift is about 75 km to the east of the Qusur-1 and Bulaq-1 wells, which are located in the modern-day valley, assumed to be the surface manifestation of the subsurface rifted section.

eFTG in the Exploration Toolkit

It is clear that the eFTG is adding value to the exploration workflow at every stage, from regional mapping and de-risking acreage to enabling accurate design and implementation of future seismic surveys. The data is also providing constraint to processing and interpretation of seismic data that is rendered opaque by the presence of salts, carbonates and volcanics. Future 3D seismic surveys are already being planned with well siting, hazard detection and reservoir mapping all derived from the acquired eFTG data.

In isolation, the imagery is impressive, especially given the regional survey’s wide line spacing. As we move to a 2-km footprint, more details will emerge from the geological understanding. However, away from the unfolding geological story, what has truly impressed the team is the advancement in performance of Lockheed’s latest system.

Now that eFTG has been in airborne operation for the first time, it is possible to draw realistic comparisons between it and older FTG instruments under actual survey conditions. Figure 3a shows the noise levels for several survey lines from FTG and eFTG surveys, both acquired in a range of turbulence levels. The solid lines represent visually fitted trend curves and suggest that FTG noise varies roughly quadratically with turbulence whilst eFTG noise is more linear. Figure 3b gives the ratio of these trends and shows the noise improvement factor of the eFTG over this range of turbulence. The minimum of this ratio for data acquired in reasonable conditions is approximately three and close to the theoretical prediction based on just the scaled- up size of the instrument. More unexpected, however, is the significant relative improvement of the eFTG data for higher levels of turbulence, where the noise ratio approaches a factor of 8. However, FTG data would rarely be collected in levels of turbulence greater than 0.9 ms-2 due to the known deterioration of the data quality. The more modest increase in noise with turbulence seen in the eFTG data has, however, allowed data to be collected in much higher levels of turbulence, leading to exceptional productivity rates in excess of 1,000 km (accepted) per flight.

Over typical survey turbulence levels, the noise offered by the eFTG is three to five times lower than the FTG – and a three-times reduction in noise is equivalent to a nine-times increase in efficiency. Consider an anomaly whose gravity signal amplitude places it at the detection threshold of eFTG noise. To see this anomaly within FTG noise levels, the survey line spacing would need to be nine-times tighter to reduce the noise to the same level as seen in the eFTG. Since survey cost increases with the line kilometres flown, the eFTG is therefore capable of imaging targets that would have been prohibitively expensive to survey with the previous instrumentation. Simply put, Horus-1 and the eFTG instrument have exceeded all expectations.

References available online. The Authors would like to thank Ganope and TGS for allowing publication of Horus-1 survey data.