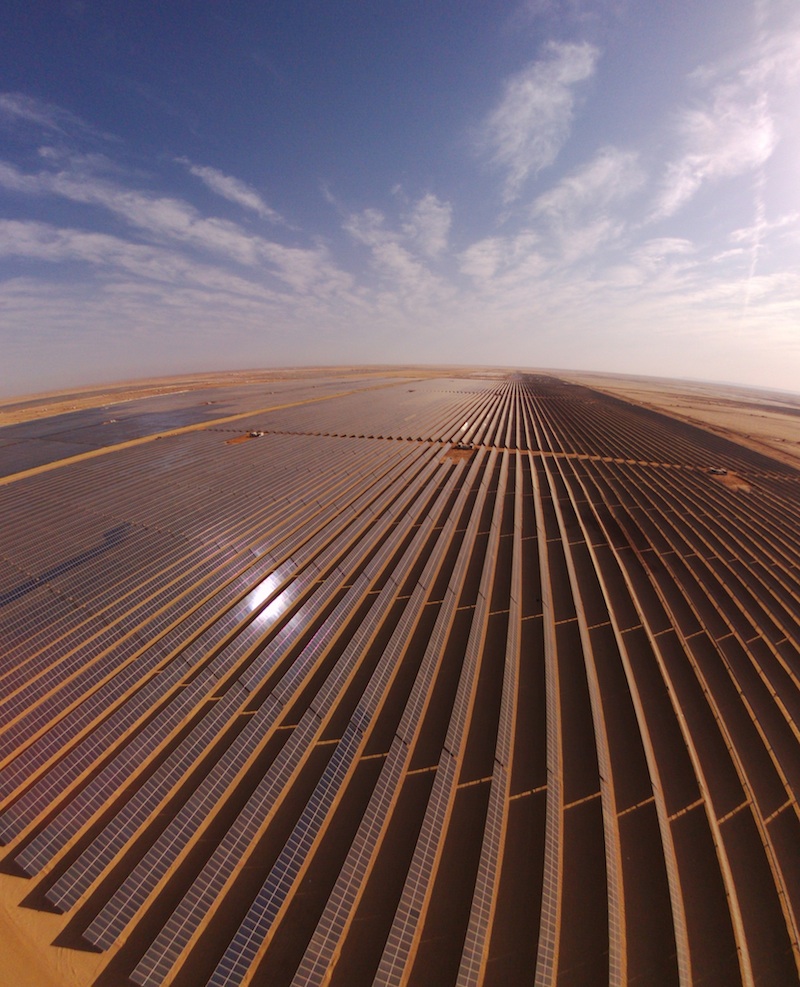 AEES1 is one of four projects being developed by Alcazar Energy in Benban. Each with a capacity of 64MWp (a total of 256MWp) which are part of the Nubian Suns development scheme led by the International Finance Corporation (IFC) in unison with the World Bank, MIGA and the Government of Egypt.

The entire solar park development spans 6×6 km and will comprise of 6 million solar panels, divided into 32 sub-projects with a total output of 1.5 GW – comparable to the generation capacity of Aswan Dam.

Speaking about the completion of AEES1, Daniel Calderon, Co-Founder & CEO of Alcazar Energy said: “It is with great pride that Alcazar Energy can confirm that AEES1 is the first of thirty projects from the Round 2 FIT programme to realise timely commercial operation within budget. The completion of AEES1 marks an important milestone for our company and we are fortunate to play a role in a programme of this scale which is testament to the spirit of partnership and cooperation required from governments, developers, investors and lenders in mobilising large infrastructure projects such as Benban. Our four projects in Egypt, together with our portfolio in Jordan will bring us to a combined capacity of 411 MW in the region.”

Daniel Lancha, Head of Delivery & Operations at Alcazar Energy further stated: “Over 2,000 direct and indirect jobs have been created during construction across the four projects, with our three remaining projects currently underway, targeting Commercial Operation Date by end of February. 21 different contractors and subcontractors were appointed on the Project, 16 of which were Egyptian companies. At its peak the AEES1 project employed 685 people, 274 of whom were from the local communities and 286 from the rest of Egypt.”

Mohamed Zidan, Senior Director Business Development – Alcazar Energy Egypt added: “The completion of AEES1 and anticipated progress on the other three projects further cements our technical capabilities and local market knowledge, as we look forward to expanding our Egyptian portfolio through our participation in the West Nile Wind BOO, West Nile Solar BOO, Gulf of Suez Wind BOO, and other EETC tenders and private projects. We are also particularly appreciative of EETC, the Ministry of Electricity and Renewable Energy, and NREA for their support.”

AEES1 has a project cost of USD 68.6m financed by loans from the IFC, also the lead arranger, Asian Infrastructure Investment Bank (AIIB), African Development Bank Group and CDC Group and equity from Alcazar Energy. The project was constructed by a joint venture of TSK and Enviromena.

Together, all four of Alcazar Energy’s BenBan Solar PV projects are expected to generate approximately USD 31.5m in gas savings from the displacement of fossil fuels, in addition to saving 311,500 tonnes of CO2, and 680,300 m3 of water per year.

When complete, Benban itself will generate electricity to power hundreds of thousands of homes and businesses. That will help provide Egypt, a fast-growing country of more than 100 million, with the clean energy it needs to drive growth.

Alcazar Energy is headquartered in the DIFC, with three regional offices in Jordan, Turkey and Egypt, and is owned by BluStone Management, Dash Ventures International, IFC and IFC Asset Management Company (referred to as AMC) which are both part of the World Bank and Mubadala Infrastructure Partners. Since establishment in 2014 the company has mobilised USD 800m in emerging markets and aims to create sustainable socio-economic value for the local communities in host countries.