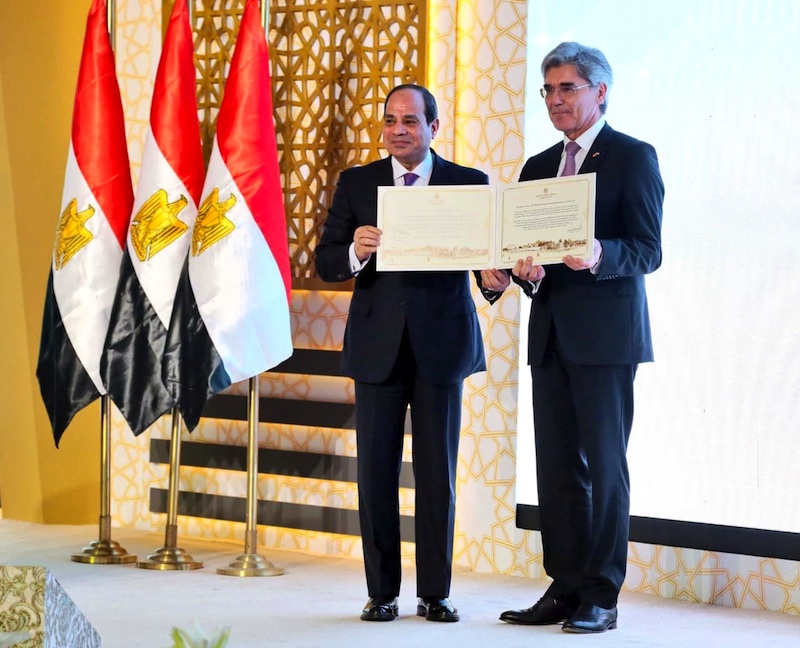 The projects include three giant power plants carried out by the German company, Siemens, in the New Administrative Capital, Beni Suef, and Burullus with a total capacity of 14400 megawatts, or about 50 percent of the electricity grid, in addition to the world’s biggest Gabal al-Zeit wind station.

As per Beni Suef station, it’s built on an area of 500,000 cubic meters. The project consists of four blocks (cycle vehicle) and each cycle produces 1200 MW, bringing the total output of the plant 4800 MW, each block contains 2 gas turbines and 2 boilers to restore energy and steam turbine.

Beni Suef station contributes by around 20 percent of the total electricity bound to the national network of electricity, especially as it operates with the highest generation efficiency of the world up to 60 percent.

Egypt’s national strategy targets to bring the contribution of electricity from renewable energy to 20 percent by the year 2022.

Moreover, Burullus station, which exists on a land of 250 feddans, will pump 4800 megawatts on Egypt’s electricity grid.

On March 2, 2017, Sisi and German Chancellor Angela Merkel inaugurated the first phase of the Burullus station via video with a capacity of 1600 megawatts.

On June 12, Egypt cut its electricity subsidies, raising prices by an average of 26 percent in the 2018-2019 fiscal year beginning July.

According to Minister of Electricity Mohamed Shaker, the overall increase does not exceed 26 percent, while the average hikes in bills for households amount to 24 percent.

The minister also affirmed that the new hikes save the country from potential losses that might reach LE 109 billion.

The projects, located in Ain Sokhna, Burullus and the New Administrative Capital, are being implemented on an EPC + Finance basis.

Elsewedy is the main contractor of the Beni Suef power plant, while Orascom is working on the Burullus and New Capital projects.

In remarks he made during the inauguration of a number of power projects in the New Administrative Capital, Beni Sueif and Kafr El Sheikh’s El Borollos, President Sisi said the company raised the operation efficiency in temperatures higher than the standard usually stated in contracts. The company raised the operation temperature to 45 degrees instead of the usual 15 to cope with the high temperature in Egypt, the president said.

“I do not want to confine the role of Siemens and focus on just this point. In fact, the company responded to all our demands particularly as regards timing, which was our biggest challenge, and cost,” the president added.

The president thanked Siemens in the name of all the Egyptians and the Egyptian state for its efforts and its response to Egyptian demands. “This was unprecedented,” he said.

Siemens AG president and chief executive officer described on Tuesday 24/7/2018 President Abdel Fattah El Sisi as the best negotiator he has ever met, thanking the Egyptian president for his constant support and wish to offer the best for his people.

Addressing the inauguration ceremony of a number of national projects in the field of electricity and renewable energy, Joe Kaeser said three years ago Siemens pledged to support and increase Egypt’s power generation potentials by more than 40%. The company also promised to reach that percentage in a record time, he said, expressing his great pride that the Siemens team has honored their pledges.

Siemens men worked seriously, have great partners and are strongly supported by the Egyptian government, he said, noting today’s inauguration of three highly efficient combined cycle power plants in the New Administrative Capital, Beni Sueif and El Borollos. Each plant represents by itself the largest gas station that generates electricity in the world. “Not just the largest but also the fastest.”

“In less than two years and a half we did this together,” he said.

He pointed out that today’s inauguration ceremony is the culmination of the hard work of 24,000 people for the same purpose and for the same achievement. “We are celebrating this together today,” he noted.

He thanked the Egyptian president for his wish to launch this project which is not for himself but for his people and to make Egypt a better state.

He also thanked the Egyptian authorities and the ministries of electricity and petroleum for their endless support and the large quantities of sand that were removed in a record time.

He thanked the minister of finance for his support and for providing the necessary funding to complete the project.